Death Stalks Her, by Peter Raft 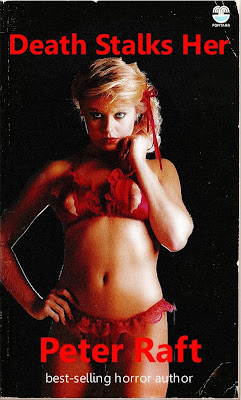 Annie Sexton has a plan in life. Meet and marry an older man, get him to make her chief beneficiary in his will and then do her utmost to lead him to his death - athletic sex, scares, anything will do. Annie is very good, she’s just about to marry husband number three and he’s richer than the others put together. He’s also heavily into Black Magic.

On a rain-swept night, Annie tempts him to a tryst in the local cemetery and she once again becomes a young widow. But in death, her deceased husband is now more powerful than she could have ever imagined. And from that point on, with every step she takes…

(the second of the two book deal Raft had with Fontana, following the end of his Mayflower contract (who'd actually wanted him to stay on, though they couldn’t agree terms). Although this had good returns for a genre novel, it wasn’t the success that Fontana were looking for and so they didn’t renew the contract. Raft had set up shop at Corgi within a month).
at 01:04

Email ThisBlogThis!Share to TwitterShare to FacebookShare to Pinterest
Labels: 1980, Death Stalks Her