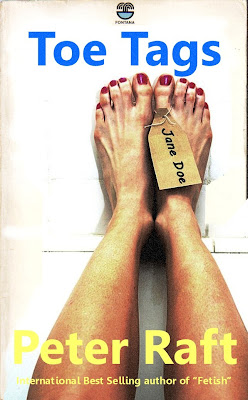 Some men like breasts, some like bums, some like full red lips. Barry Charles loves women’s feet. He likes to stroke them, to pamper them, to kiss them and to do much more. So much more. Worse, Barry doesn’t care if the woman enjoys the attention or not.

Sweeping through the London of today, finding his prey in the clubs and disco’s that glitter in the capital, Barry is looking for the perfect feet. And when he meets Stef Sukowski, an American exchange student, it appears that he’s found them. But Stef has other ideas. And she certainly doesn’t want to end up wearing…

(following the collapse of his Mayflower contract - they wanted him to stay on, but terms couldn’t be agreed - Raft signed with the UK based Fontana in the hope that this would build his name in his beloved home country. The book sold well and a good, solid story helped).
at 01:57