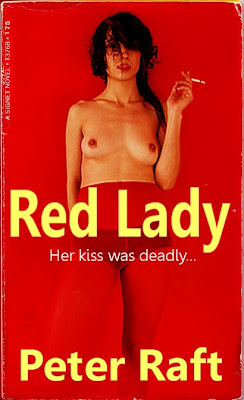 International model and lover to Kings and princes and movie stars, Heidi Benson was known the world over. Devastatingly beautiful, intelligent and funny, women wanted to be her, men wanted to bed her.

But Heidi Benson had a secret. One that was locked up deep down inside, from things that her step-father had shown her and taught her. Things that sometimes, just sometimes, Heidi had to act upon.

When she meets movie star Steve Lockhead, sparks fly. Until they go to Acapulco, to shoot a movie and Steve says that one word that always tipped her over the edge and into a murderous rampage.

Published by Signet Books (T3768), December 1973
(published as a “second-string-quickie”, this actually performed better than “The Possession” and Signet never published Raft in a cheaper edition again)
at 21:14