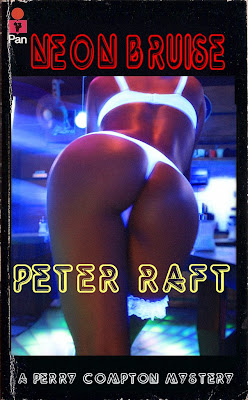 Perry Compton is called in to help out an old friend. Gayle Anderson runs “Neon Nights”, the hottest nightclub on Miami beach. The problem is, some of her customers are winding up dead in the toilets. Everything points to rival nightclub owners, so it’s up to Perry to prove it.

But there’s a new drug in town - Neon Bruise - that strips away every moral impulse of its users. Some take sex to the next level, some take even more drugs, some decide to settle old scores.

(With this book, Raft and Pan parted company. By all accounts, it was a completely amicable agreement, but sales were known to be dropping on the series and Raft was desperately unhappy with the cover art).
at 01:44