In an effort to either widen his reach and stretch his talent (my thoughts) or "pick up more of an audience, I had hungry mouths to feed" (Mr Raft, in an interview), Raft wrote a series of novels featuring private eye Perry Compton. Published through Pan Books in the 70s, going into the early 80s, all of them were set in Miami (where Raft lived at the time). 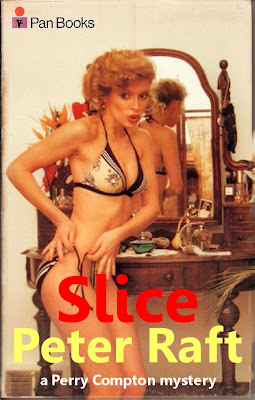 Perry Compton is down on his luck. Busted out of the police force, he sets up in private practise just as local socialite Hannah Harare is spotted driving erratically. Following her tyre-tracks, the police discover a hit and run victim, covered in knife slashes.

Did Hannah do it? Was the victim trying to blackmail her, since Hannah’s private life was anything but. Or is there something else going on, someone from Hannah’s past, who feels cheated out of the life he should have had and who will stop at nothing to get what he feels is rightly his?