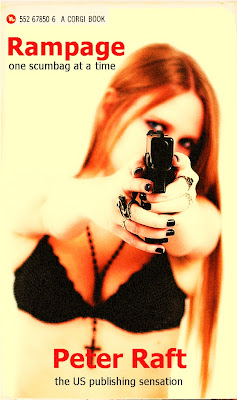 Carolyn Baron was a young girl, caught up in the wrong crowd, doing the wrong things. The petty theft wasn’t too bad, the blue movies were a step in the wrong direction, but when her friends sold her off to be a sex-toy, that was the last straw.

As she is about to be raped, Carolyn lashes out at her “owner”, killing him outright. With her owner’s gangster friends after her, she goes on a rampage, to take out everyone who had led her to that situation.

One scumbag at a time.

(the only Corgi book Raft ever published. Following the two book deal with Fontana (itself following the end of his Mayflower contract), he tried Corgi as they were primarily a UK house and he thought it would help with his homeland book sales. Unfortunately, the book was sold to completely the wrong market - blue movies and revenge, stalwarts of Raft’s work, do not necessarily appeal to the crime crowd. As it was, Pan - who published Raft’s ‘proper’ crime series, wouldn’t touch this with a bargepole).
at 00:18